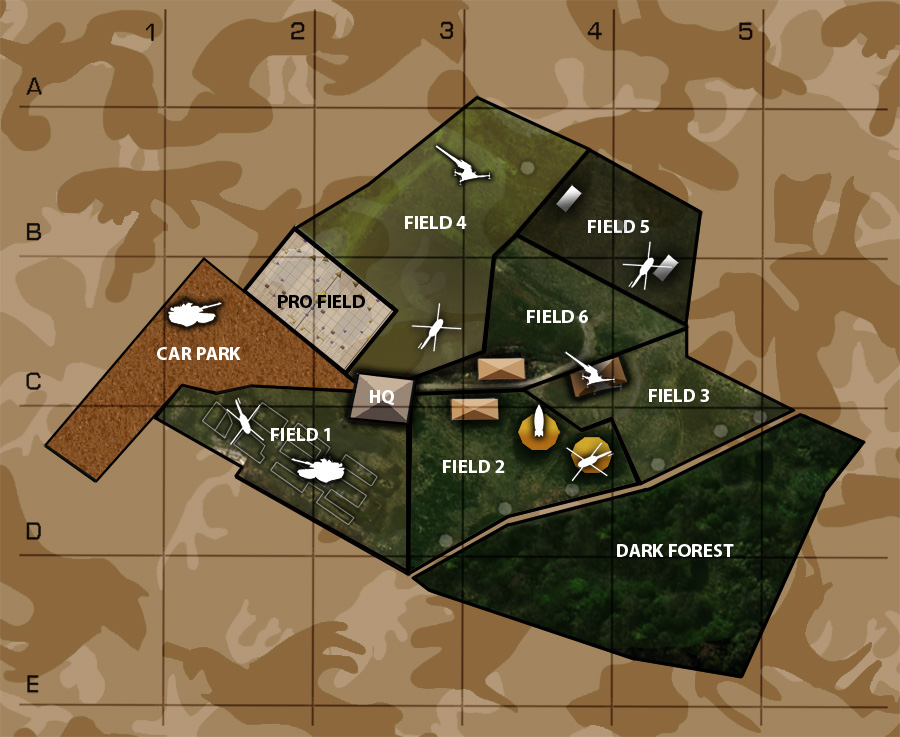 After the nuclear fallout turned the landscape to ruins, the race is on to gain back your territory! You must take command of the other teams basecamp by destroying the other team, and capturing their base and raising your flag!

Zombies have risen, and you must defend your basecamp as the zombie horde approaches! Can you fight them back until reinforcements arrive in 10 minutes? Or will it be too late for you, and you’ll find yourself with an insatiable desire for human flesh, and join the hoard of the undead!

Armed with explosives, the squad must take out the oppositions Nuclear reactor before they are able to launch their missile! The opposition must protect their nuclear reactor at all costs to ensure the success of their attempt at world domination!

One team must infiltrate the the opposing teams barracks to free their captive team mates, who are being held hostage. Can they retrieve their fellow comrades before time runs out – and they are gone forever? The other team must battle it out to keep control of the barracks, and ensure that the captured hostages remain in their grasp.

The local aircraft gunners have taken down one of your Black Hawk Helicopters, and your engineers need 10 minutes to repair it so that it can get the hell out of enemy territory! Will they be able to fix it in time – before the enemy squad of aircraft gunners come and finish them off? The helicopter must be protected at all costs!

Both teams are in a race against time to retrieve the flag which is held in the centre of ‘No Mans Land’. After the flag has been retrieved, all surviving squad members must get into the other teams base. Remember! Leave ‘No Man’ behind! The whole squad must make it to the oppositions basecamp!

Both squads must battle it out to become the ‘King of the Hill!’ The squad to get there first and raise the flag with their squadron colours for the longest time, gets to taste victory!

The Pro paintball field is not for the faint hearted, and is where paintball gets serious! The ‘Bunkers’ used are all inflatable and the field is laid out perfectly symmetrically on a flat field. This ensures that each team plays on an ‘equal playing field’. This really separates the paintballers who have skill – the winning team is the team which eliminates their opponent, and touches the buzzer at the other end of the field!

Beware! For those who enter the dark forest may never return…!

We have ample parking in our private car parking area, which is situated well away from any public roads.

This is the base of operations for mission briefings, equipment provision – with rest and refreshment areas, and safe area between games.

This website uses cookies to improve your experience while you navigate through the website. Out of these, the cookies that are categorized as necessary are stored on your browser as they are essential for the working of basic functionalities of the website. We also use third-party cookies that help us analyze and understand how you use this website. These cookies will be stored in your browser only with your consent. You also have the option to opt-out of these cookies. But opting out of some of these cookies may affect your browsing experience.
Necessary Always Enabled

Any cookies that may not be particularly necessary for the website to function and is used specifically to collect user personal data via analytics, ads, other embedded contents are termed as non-necessary cookies. It is mandatory to procure user consent prior to running these cookies on your website.